Posted By Ray Nicolini
Via www.slashgear.com

Now that we’ve reviewed the gigantic Galaxy Player 5.0 for what it is on its own, it’s time to compare to the rest of the market a bit more in-depth, starting with what at first glance might appear to be the Player’s closest cousin: the Galaxy S II. Before we continue, know this: it’s almost as if these two devices aren’t from the same family, that’s how different they are. Though the Galaxy Player 5.0 is only being released now near the holiday season, the Galaxy S II (in all its forms here in the United States) takes no prisoners when it comes to power and abilities.

The Galaxy S II comes in several different shapes and sizes here in the United States, two of the more powerful ones being the two we’ve got right here, the Galaxy S II from AT&T and the Galaxy S II Epic 4G Touch. The first of two has a 4.32-inch display at 480 x 800 resolution and a 1.2GHz dual-core processor made by Samsung. The Epic 4G Touch has the same specifications on a 4.5-inch display. This means that the pixel density is down but the power is the same. The Galaxy Player 5.0 has a single-core processor at 1Ghz that’s also made by Samsung and a display that’s 5-inches large with the same 480 x 800 pixel resolution. In addition, the Galaxy Player has a TFT LCD display while the Galaxy S II units both have a Super AMOLED Plus display. Have a look here to see if you can spot the differences in quality:

Each of the displays above are set to full brightness, and the device on the far right is the Samsung Stratosphere. This device is a 4G LTE enabled Samsung device with a Super AMOLED (not plus) display also at 480 x 800 pixel resolution. Again, see if you can tell the difference from the photo above. Have a peek at the video below for a hands-on comparison of the Galaxy Player 5.0, the Galaxy S II in the two flavors mentioned, and the Stratosphere, each of them in kind:
So what about price comparisons? Have a peek here at some prices that are live RIGHT this second here:
Galaxy S II AT&T $199 on contract $549 off contract
Galaxy S II Epic 4G Touch $99.99 on contract $599.99 off contract
Samsung Stratosphere $149.99 on contract $409.99 off contract
Galaxy Player 5.0 $259.00
And heed this again: the Galaxy Player 5.0 has no on contract price because there is no contract in any instance, it’s a Wi-fi only device. The question you’ve got to ask yourself, as with all decisions between devices like these, is “what do I want this device to do?” If it’s just having a one-time-only cost for a 5-inch display having device that’ll work as a display for games and videos in a variety of places on a Samsung interface, the Galaxy Player 5.0 is your clear winner as it’s essentially your only choice.

If on the other hand you want power, thinness, and connectivity wherever you go, you’ll be best off with one of the Galaxy S II devices. For 4G LTE, you can either choose the Stratosphere here or the DROID Charge, another lovely choice from Verizon. Of course all of these are Samsung devices. What if you want a comparable device to the Galaxy Player 5.0 but don’t mind if it’s not a Samsung-made interface and set of hardware? We’ll be working with an iPod Touch next – stay tuned to SlashGear for more!

Posted By Ray Nicolini
via HippiesBeautyandBooksohmy.com 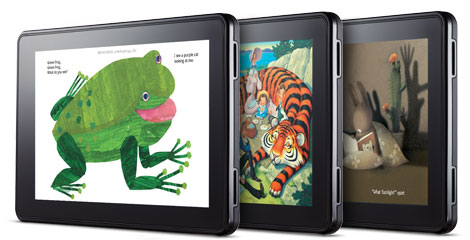 The Kindle Fire has garnered a tad bit of attention by now.  But when I posted an article about it a few weeks back the Kobo Vox was mentioned in the comments.  And now B&N has fired back at Amazon with their Nook Tablet.  So I thought it would be fun to have an article explaining the differences, and which e-reader tablet is the best. 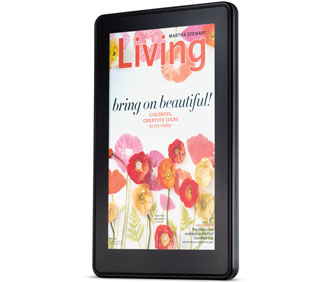 The Kindle Fire was announced on September 28thand will be released on November 15th 2011.  Essentially a tablet computer running Android, Amazon chose to target an audience with a new, more feature full e-reader rather than compete against the iPad2.
Outside of the amazing hardware, the Kindle Fire includes features like:
At launch, the Kindle fire will debut for $200.

Kobo Vox
The original Kobo e-reader never really took off.  It partnered itself another book store that eventually went under (ciao Borders, you will be missed.)  In reviews, the Kobo earned itself the reputation as a lower end e-reading device because of the slow response time the device offered.  Could the Vox be the underdog e-reader tablet?
The Kobo Vox was announced in mid October and already launched on Oct. 28th.  At the time of writing, it was listed as “in-stock.”
Among the features, the Vox includes:
The Kobo Vox debuted at a price of $199.Click "Read More" for the rest of the review.
Now, as a geek, I have to list the tech specs.  Some of you might appreciate this.  But this also exmplains pricing and what you get.
Note: The best spec for each category is italicized.
Spec wise, the Kobo Vox is way behind.  To compare the hardware, the Kobo Vox is using hardware similar to phones from two years ago, or the original Nook Color, while the Amazon Fire and B&N Nook Tablet are using current gen specs.  What’s interesting, despite the two year old hardware of the Vox, it remains the same price as the Fire.  The original Nook Color proved to be rather snappy considering its specs, so perhaps, overtime, the Vox will prove the same.  My concern is that the Vox is running closer to Vanilla Android 2.3 where the Nook Color had a highly optimized version of Android under the hood.In the case of hardware alone though, I can easily see why the Nook Tablet runs $50 more than the Fire with the extra size battery and 8 extra gigs of internal memory.
Hardware specs rarely mean anything to consumers now of days though.  The product is all about features.  Sow what do these three e-reading tablets offer?
And there are many other features we could mention and nit-pick about.  At this point, personally, I would drop the Vox out of the running.  The Vox runs the closest thing to Vanilla Android as these three tablets will get and will have access to the Android Market.  But with that said, the Nook Color is now $200 and has the same features and specs.   Once more, the Nook Color can be quickly and easily rooted and have Honeycomb installed if the user wants that stock Android feel.  The only real benefit the Vox offers is a variety of colors, and support for all e-book standards.  I can barely call that a benefit as the Nook Tablet supports all but the obscure formats, and the Fire can support all formats with 3rd party apps.
The Kindle Fire and Nook Tablet offer a lot of the same features.  The Kindle Fire offers the Silk web browser which compresses web pages server-side to make web surfing faster.  Any normal home or work WiFi shouldn’t pose much of hindrance to web surfing for either device though.
The Kindle Fire has cloud support for external storage.  The Nook Color doesn’t.  So what are the pros and cons to that?  The Kindle Fire has all but unlimited storage, at a price.  Anything more than 5Gb will cost you extra per year.  You also have to be connected to WiFi to use that unlimited storage, otherwise you’re stuck to the internal 8Gb.  The Nook Tablet has no cloud storage beside the books you purchase.  But it has 16Gb of internal memory and is expandable up to an additional 32 gigs.
Amazon has the clear winner for app availability.  The Amazon Android App Store is almost as robust as the native Android Market.  The B&N app store for the Nook is a little puny.  This is plain and simple.  Depending on what your needs, or wants, are, the B&N app store may feature apps for what you want.
Let’s take one last look at some pros and cons:
Conclusion
As I stated, I wouldn’t even consider the Kobo Vox.  It has outdated hardware on a pure Android experience.  The problem is, similar smart phones with the same hardware have trouble running android 2.3 well.  The Nook Color has the exact same hardware and a proven record.
That leaves us with the Kindle Fire and the B&N Nook Tablet.  Here’s the deal, the Fire is $50 cheaper but offers no storage expandability, only 8Gb of storage, and a smaller battery.  The Nook Tablet is $50 more, has no cloud storage, but has a bigger battery, 16Gb of internal storage, and expandability up to a total of 48Gbs.  If you intend on putting movies and music on your tablet, then the 8Gb of internal memory on the Fire will fill up quickly and cloud storage requires an active internet connection.
Past that, the difference in features are very minimal.  Personally, I will be looking forward to the Nook Tablet in hopes that an easy rooting method exists later on.  My wife really wants the Kindle Fire.   So that may be the appeal, the Nook Tablet to Geeks and the Amazon Fire to everyone else.
Have any comments or anything else you want mentioned?  Leave us a comment and we might edit it into the article!Update:  I originally stated that the Nook Color was now $150.  Apparently after checking again, B&N is selling the device for $200.  The original $150 price tag was a misprint from the local B&N store.
Posted by Unknown at 11/18/2011 09:54:00 PM 2 comments: